Be Firm Upon the Sunnah and Beware of Haddaadiyyah 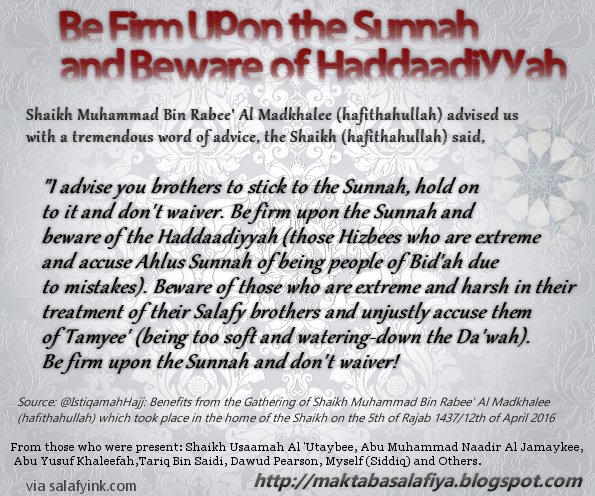 Be Firm Upon the Sunnah and Beware of Haddaadiyyah

I advise you brothers to stick to the Sunnah, hold on to it and don't waiver. Be firm upon the Sunnah and beware of the Haddaadiyyah (those Hizbees who are extreme and accuse Ahlus Sunnah of being people of Bid'ah due to mistakes). Beware of those who are extreme and harsh in their treatment of their Salafy brothers and unjustly accuse them of Tamyee' (being too soft and watering-down the Da'wah). Be firm upon the Sunnah and don't waiver!

From those who were present: 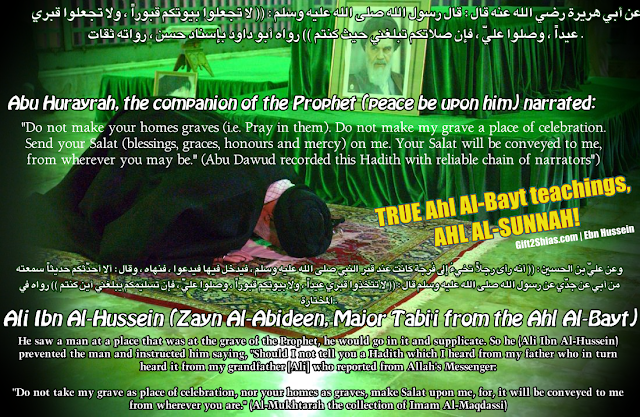 Q: What is the Islamic position with regards to the Shiite coming out of Iran, especially as it relates to the abundance of them present at the Sanctuary (in Mecca) and the elders from them? How do we interact with them?

A: Interaction with them falls between two (varying) circumstances. You either have the ability to affect them and to (properly) call them to Allah (worship of Him based on revelation) just as you would call the Jews and Christians to the truth making it clear to them. If this is the case, call them to Allah and if you do not possess the ability to do so (which is the second circumstance) then distance yourself from them. Allah only burdens an individual with that which he can bear.

And this is a calamity that has befallen to which there is no escape. It has befallen and is a trial for us, as we are unable to prevent them from entering the Two Sanctuaries. As a result we are tested by way of them just as the companions were tested by way of the hypocrites. So this is the reality. Consequently the strong students of knowledge and the scholars must take on the responsibility of inviting them to Allah, presenting (to them) the proofs, and referring them to the truth. Either they will accept and if not then the proof is established against them.

As for the small student of knowledge he distances himself and abandons them. He should not be like some who say “the Shiite are our brothers, the difference between us and them is like the difference between Malik and Shaafi’ee.” Those who say this are deceivers who misled the Muslims. A multitude of adherents to the Sunnah have plunged into the arms of the Shiite due to this watering down (and distortion) of the affair. Multitudes in Africa, (specifically) in Sudan and Egypt. Have you not heard about what transpired in Egypt during the medieval era? The batini Shiite ruled Egypt and circulated throughout the land shiism along with the batini ideology, then Allah granted Sallahuddin Al Ayyubi victory in conquering them. Subsequently their government fell and the Sunnah’s influence returned to Egypt. There remained some who upheld the batini ideology under the cloak of Sufism and this is the reason why they can’t outwardly display neither shiism nor the batini ideology.

Unfortunately in this era the craving of the Shiite has intensified with respect to returning shiism and batinism to that country and they have begun to spread their poison. Did you all hear the answer (to the initial question)? The Questioner asked about the Shiite and ones conduct with them. We replied with it being binding upon the strong students of knowledge and the scholars to invite them to Allah, and to make clear the truth. Perhaps Allah will guide whomever He wills from those among them. As for small students of knowledge they are to avoid, shun, and show no regard towards them. And we say the opposite of what some deceivers say from those involved in politics “the Shiite are our brothers, the difference between us and them is like the difference between Malik and Shaafi’ee.”

This is inventing a lie on Allah and misleading the Muslims, subsequently causing many from those who attribute themselves to the Sunnah to be flung into the arms of the Shiite.